Held in the hall on the night of Tuesday 25th November, Awards Evening welcomed parents, teachers and ex-Year 11s in appreciation of the last academic year’s achievements, and those who achieved them. In attendance was recently-elected head of Portsmouth City Council, Donna Jones. Taking to the stage, she gave a rousing speech chronicling her childhood and her plans for the city of Portsmouth, but not before congratulating the award-winners. 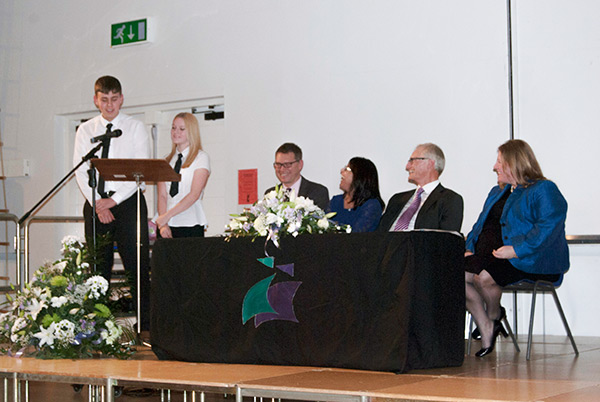 Later on, the atmosphere of the evening became thick with the smell of anticipation and chicken goujons. Every subject in each year gave out an award, with many students winning multiple honours. Rewards were also given to otherwise outstanding students, funded by local colleges and universities.

When the awards were given out, our exceptional students applauded, and the speeches heard, the mall became a bustling hive of activity, as attendees flooded the narrow walkway in search of food from the buffet; there, the parents, the teachers, the students, the ex-students, and more became one, brought together by the excellence displayed by all of our students.

Overall, it was a successful night. The entertainment on display was exemplary of our talented performers in the school, and the graciousness of the winners was a testament to the high standards that are constantly being set in every lesson of every day.