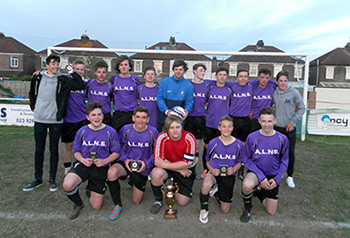 The year 11 boys made sure it was a final night to remember when they pulled on the ALNS shirt for the last time with a dramatic comeback victory against Milton Cross, winning 4-3.

The boys were not at the races during the first half and went in 2-0 down. After an inspirational team talk from manager, Mr Brown, & Director of Football, Mr Stubbs, they came out and made a strong start to the second half scoring within 5 minutes from the boot of Tommy Scutt.

However, Milton Cross scored again to make it 3-1.

They boys rallied together and with 20mins to go Brad Hayward scored to make it 3-2 and with 5 minutes to go Ben Oldfield scored from a yard out from a corner to make it 3-3. The game was heading to extra-time! Then some excellent foot work from Brad Hayward produced the opening to enable him to put in pin point left footed cross and Tommy Scutt did the rest putting a header back across the goal to seal the victory.

A special mention need to go to Harry Bedford for this man of the match performance.