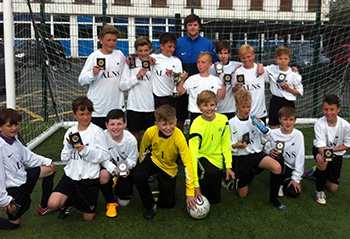 On Thursday the 7th of May the ALNS Yr 7 football team went to Priory School to take on Milton Cross in the Portsmouth Schools Cup Final.

The boys had a bit of a slow start for the first 15 minutes and didn’t seem to come to life until a Milton Cross shot struck the post of the ALNS goal. Appearing to be woken up by this near miss, the ALNS boys responded well, pressing on the attack until an ALNS free-kick was awarded on the edge of the Milton box. For this, centre mid-fielder Toby Toman stepped up and rifled the ball into the top right corner of the net. Clearly shaken by going behind, Milton Cross then lost the ball minutes after the re-start due to pressure from Zak Henwood. Zak then picked up possession, beat two defenders on his way into the box and slotted it past the Milton keeper to make that two goals in quick succession. Going 2-0 up so quickly then appeared to cause a bit of complacency in the ALNS team toward the final 5 minutes of the first half and just before the interval Milton managed to get one back making it 2-1 at half-time.

The second half started and both teams came out re-charged and looking to secure their first cup win in secondary school football. However, after 5 minutes and some good possession play, ALNS picked up the ball on left flank which was then subsequently whipped in towards goal, deflecting off the bar. However, the chance was not wasted as winger Liam Roose reacted well arriving late at the far post to head the ball in to the Milton goal making it 3-1 with 20 minutes to go. In an attempt to counter this, Milton upped their game instantly, pressing on the attack and defending well as a unit. But when an overzealous challenge by a Milton player gave ALNS a free-kick just inside their own half, Team Captain and stand-out player of the season Ben Winslade stepped up and looped the ball over the keeper from 40 yards to make it 4-2 to ALNS. Again Milton upped their game and for the last 5 minutes the game looked like there would be yet more goals to come at either end. In the last 2 minutes the pressure paid off for Milton with a very well worked goal making it 4-3. However, with some solid defending and some well gathered collections by Dudley Jennings in the last minutes there was nothing Milton could do to get another goal and the whistle went securing victory for ALNS in the Pompey Schools Cup.

In conclusion, it was an amazing afternoon for the Yr 7 lads who put absolutely everything into the game and never gave in against a strong Milton Cross side. The Man of the Match was awarded to Zak Henwood for an outstanding performance, winning absolutely everything on the floor and in the air as well as being the physical and technical presence in the centre of the park that allowed those around him to play excellent football (not to mention his well worked goal in the first half). Other exceptional performances included Ben Winslade, Toby Toman, Liam Roose and Jacob Oldfield. However, it was a team that played in the final and a fine team performance it was with great performances by Charlie Buckle, Dudley Jennings, Tom Webb, George Kellow, Louie Lister, Jack Cobb, Louie Bollard, Sasha Howe-Haysom and Ashley Ranscome.

In additional thanks, the whole team and Mr Brown would like to thank Ben Pearce (Yr 11 student) for all the time, effort and dedication he has put into to the Yr 7 team this season in order to help turn them into the champions we already knew they were and for co-writing this match report.