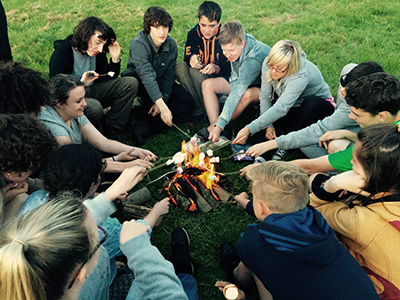 On the 13th and 14th of June, three Duke of Edinburgh’s Bronze Award groups took part in their practice expedition. The practice expedition is a similar format to the qualifying expedition, but is designed to find any skills that need to be developed or equipment faults, and also the groups had access to a staff member for advice and guidance.

Heavy rain overnight on Friday 12th was not a good sign, however as the first group set off from Clanfield on a slightly chilly Saturday morning, accompanied by Miss Aston, the sky was clearing and the temperature was rising.  The second group, with Mr Sharp, set off 20 minutes later, followed by the third group with Mr Payne.  Miss Hill headed off to the first checkpoints to keep and overview of all three groups.

The groups took varying routes on and around the South Downs Way, and the standard of navigation was excellent – with students finding their own way and using the map and compass really well, with only occasional advice needed from staff.

After six long hours of hiking, the camp was in sight, with all three groups arriving from different directions.

After a quick break, the tents went up and the students turned their attention to cooking their main meal.  A wide variety of food was cooked, from pasta and noodles to curry and hot dogs.  After dinner and some games, Adam Puckett built the group a campfire which was a real success.  The whole group came together to toast marshmallows and chat – it was the perfect end to the day.

Sunday saw the students rise nice and early, with a variety of breakfasts being made.  After the camp was broken down and packed up the groups departed for their second day of walking.  Building on the success of the first day, students were given increased independence on the second day – and with no, or very minimal, input from staff they managed to navigate their route faultlessly and all arrived back in Clanfield slightly ahead of schedule.

This was a great learning experience for the students ahead of their real expedition in September – and despite the tired legs and heavy bags, they all remained in good spirits throughout the weekend.

Thank you to Miss Aston, Miss Hill and Mr Sharp for giving up their weekend to support this trip.