On Friday 10th July, I went to the Globe Theatre in London. This trip was amazing. Even though I thought it would be boring, it was actually decent and I’m glad I went. We left school at 8:30 and we had an eventful, two hour journey to London. We started singing songs, even Miss Freathy joined in. 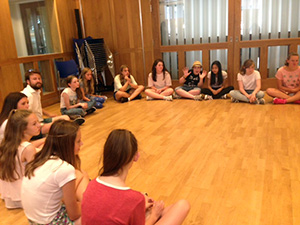 When we got there we had a 5 minute walk to get to the Globe Theatre. As we got to the entrance, our tour guide told us about the Globe. Our tour guide was also an actor at the Globe theatre. He had a very strong voice and was very loud. He taught us how to speak loudly without shouting.

In the afternoon we looked around the museum. There were some actors being taught how to sword fight. Then we had an even better two and a half hour journey back with traffic so we started singing songs again. Then we got back to the school at approximately 5:00.