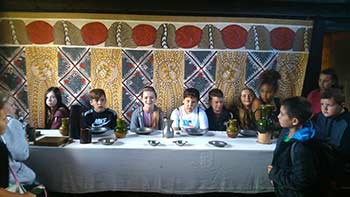 The day started with heavy rain but by the time the coaches were loaded the sky was bright and year 7 travelled towards Singleton to visit the open air museum. The aim was to look at houses from Medieval and Elizabethan times to tie in with their year 7 history studies.  On arrival 100 year 7’s were escorted into the courtyard of the museum and the tour began.  We saw houses from the era of the Black Death and discovered the differences in lifestyles between the rich and the poor.  During our tour we also looked at how people who were wealthy in the time of Henry VIII may have lived and sampled the workings of a Tudor kitchen as well as a Tudor toilet!  We experienced the workings of a proper water mill and some groups were able to feed the ducks in the big mill pond as well and sample the delights of biscuits made on site using the flour ground at the mill.  By lunchtime the sun was out and we sat outside for a well-earned rest. A final look around and a visit to the gift shop and we were on our way back to school.  A huge thank you to all the staff who helped out for the day.  The students were a credit to us. 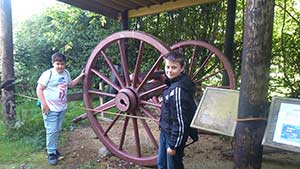