On Monday the 9th November the members of the ALNS Challenge Club organized a session for primary schools (Westover and Copnor) to come to ALNS and take part in lots of challenging STEM activities. This included: bridge building; an acid and alkalis experiment; sweet destination; musical maths; tower building and parachute building. A competition was held at the end as to whose parachute took the longest time to hit the ground. 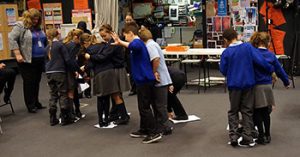 During the planning process of this event, the members of the ALNS Challenge Club met up at lunch times and after school. We discussed what activities we would do, who would run them and how many people would be in each group. We also had to provide our own equipment; this meant going to places such as the science prep room and the art room.

At the beginning of the session there was a starter game which was led by Dani Francis. This was a game where you had 2 pieces of paper between 3 people, and you had to use these 2 pieces of paper to get from one end of the room to the other. To do this they all had to use teamwork and good communication skills as there were people from different schools in their team. Another person who really got involved was Caitlin Gains (the project manager). Unfortunately, she was not able to attend the actual event, however she played a key part in the preparation and was able to make sure everything was ready for the day.

All of the children enjoyed the session and everyone agreed that it was a big success!