On Monday 17th October the Computing department welcomed some of Copnor’s Year 5 students for a taster in programming using Microsoft’s Kodu software in our Media suite. 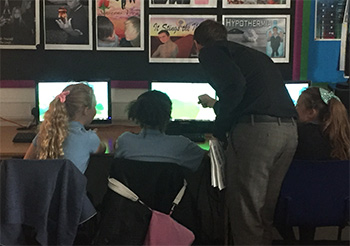 Year 5 took on the role of Creator as they designed and made their own worlds, complete with crazy characters, tricky terrain and treacherous waters.  They used their new found computational thinking to experiment with the visual coding to move their characters around, shoot hearts and footballs (amongst other things) at each other and get their objects talk to each other.

The students were brilliant, enthusiastic and keen to learn new skills.  All were crowned Kodu Kings and Queens.

Thanks for joining us!