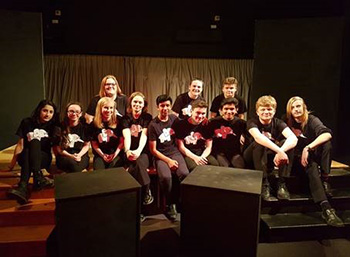 On Wednesday 29th March this years ALNS Theatre Company performed a studio performance of  “Scratching the Surface” as part of their BTEC in Performing Arts. They performed to an invited audience of friends and family and were quite simply phenomenal in their delivery of an exceptionally powerful piece of theatre.

The play is all true, which makes it all the more powerful. It tells the story of Rob, a young man who, as a teenager, self-harmed. Mark interview him and his family about his experiences and the trauma of living with a “constant elephant in the room”, as they describe it. The cast re-enact moments from Rob’s past and explore how his self-harm impacts upon the lives of everyone he knows.

The cast and crew worked together to create a true ensemble performance. The technical elements of the show were very well managed and truly enhanced the performance. The whole cast were highly professional throughout the performance and the rehearsals process really raised awareness of an issue that affects 1 in 5 15 year olds!

“You feel like a small helpless being, to the point that you’d hurt yourself and everyone around is different to you.”