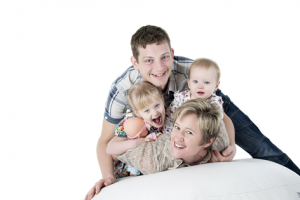 Jo Warwick was Keen, left ALNS in 2001, was in the second intake to this new as yet un-built school. I have great memories of Penhale road school where we were temporarily while the school was being built. Moving to the new shiny big school was terrifying, we didn’t realise how lucky we we were.

What have you done after your life at ALNS?

Initially after leaving school I went to Havant college and studied travel and tourism, I worked for a couple of summers in Jersey in hotels but soon realised that, Jersey was too small a place and too far from home. I did a couple of summers working as an activity instructor for the scout association teaching children climbing, abseiling, archery and rifle shooting, this was hugely satisfying and rewarding but was again only seasonal work.  Time to grow up and get a full time job so at the age of 22 I started an apprenticeship as an electrician with the NHS. During my apprenticeship I met my now husband at the training centre. I qualified as an electrician, when onto Southbank university to do an HNC in electrical and electronic engineering. Changed role within the NHS to monitor energy efficiency of buildings. Legislation changed and I was asked to carry out some waste audits…the only thing I knew about rubbish was to put it in a bin. Environmental management NEBOSH diploma later and my job really did become rubbish, I was the trust waste manager for 4 years. My colleague, who I shared an office with left, and suddenly I found myself doing his job as well as my own, I made a joke one day to the boss (who was just about to retire) I’m doing his job as well I should be getting his money ….so I got a promotion, to Building and Environmental Compliance Manager.   It was around this time having been together for 8 years, and having brought a house together we decided it was time to get married. Later that same year we had our first daughter. 2 years later our second and last might I add daughter was born. I have just returned back to work after my 2nd maternity leave and I realised how much I miss work, the adult conversation and interactions.

What has your biggest achievement been since leaving ALNS?

Having 2 children, and remaining almost sane.

What are your future plans/goals?

Keep my family smiling and having fun, finish renovating our house – that we brought 6 years ago and to complete an extension to the house. Also a family holidays – buckets and spades on the beach, camping.

What advice would you give to current students at ALNS?

having goals are great it can focus you, however don’t forget the journey it makes you who you are. Don’t worry about changing your goals as your go along the journey.